Last summer I was bumming around Seattle and decided that I wanted to start shooting on film. The technology behind digital film and video cameras and how it corresponds to its analog counterparts fascinates me and I figured shooting on film would be a) fun and b) help me better understand modern cameras.

I took to craigslist and found someone selling a Minolta X-370 and three lenses for, no joke, 50 DOLLARS. I immediately reached out and arranged to purchase the gear. The seller (whose name I don’t remember) just wanted more people to shoot on film so he was basically giving the camera and lenses away at cost price.

What does this have to with Strasbourg and Paris, France? The Minolta is an older camera and overtime it has developed small openings in it that allow light to come in. Normally you don’t want this. The result is that every time I shoot a roll of film, it is effectively a game of chance whether or not a photo will feature one or multiple light leaks. The film advance (the device that moves to the next frame) is also a little funky so occasionally photos get cut in half or I accidentally shoot a double exposure.

As I don’t use this camera for any professional reasons, I love the random creativity and lack-of-control it inflicts upon the images. It fundamentally changes the way I shoot. I simply shoot the photo as best as I can, maybe twice if I want to increase the probability of a clear photo, and from there the camera takes the reins. With digital cameras and editing software a photographer can have serious control over their image. Even the photos you will see below could be digital photos that were later doctored in photoshop to include light leaks and have that warm grainy film look.

The key to all of this is that they are not. In some (read: many) cases the eccentricities of my camera ruin a good picture. In other cases, it creates something creative and spontaneous that has been lost in the digital age of unlimited photo storage and HDR imaging. It is the randomness and the feelings of joy and disappointment that arise after eagerly waiting to see how the images turned out that are impossible to replicate no matter how good of a photoshopper you are (read: phonies). I would love to show you all the photos in person, but I hope that at least some of the feeling comes through here. 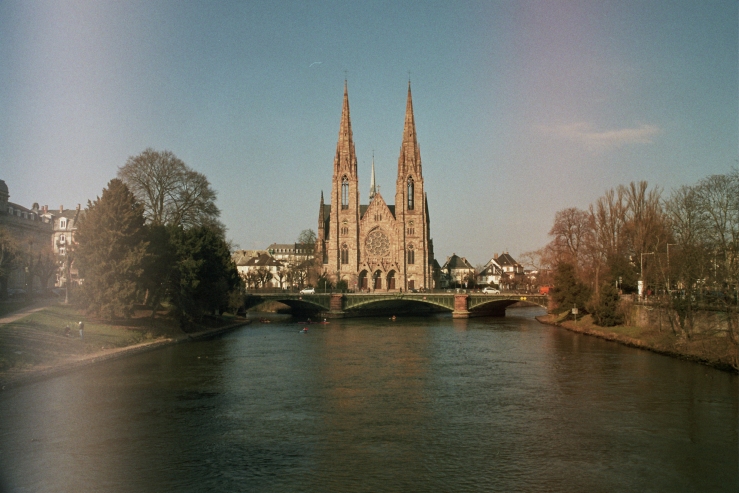 Strasbourg is located along the German border in the Alsace region of France. The city has swapped hands between the Germans and the French over the years and the result is a magical mix of cuisine, architecture and culture. 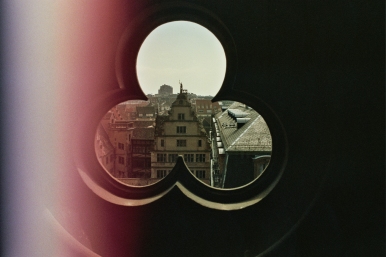 The cathedral in Strasbourg inspires awe. At nearly 500 feet, it was at one point the tallest building in the world and remains the tallest building built entirely in the Middle Ages. Coming around the corner to see the church I felt as if I was launched 500 years back in time and could do nothing but marvel at the might of Catholicism. Goethe said it best describing the cathedral as a “sublimely towering, wide-spreading tree of God”. Nailed it, Goethe. 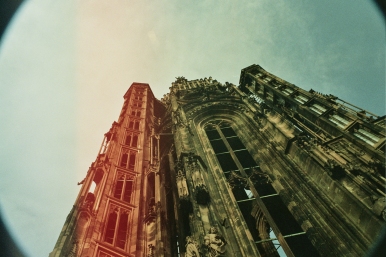 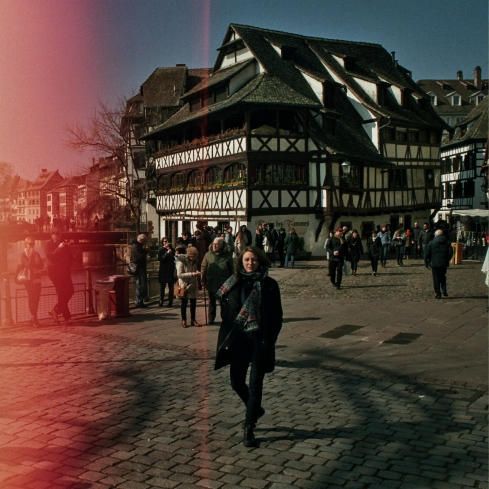 The picture above featuring the adorable Samoyed is a great example of a photo that really wasn’t asking for a light leak, but there it is and there it will stay. Seriously click the Samoyed link. 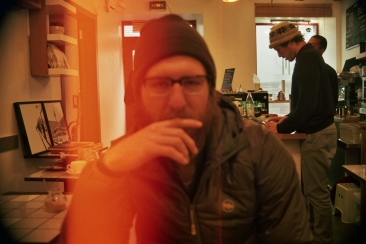 A rare personal, light-leaked and out-of-focus appearance on the blog. Photo courtesy of Rachel Burns who can be seen above enjoying bread and spread in front of a quintessential French cafe.

This was an attempt at a long exposure featuring Rachel riding a city bike toward the camera. Didn’t work super well, but I still dug it enough to put it in here.

I’m not going to delve into the details of my trip to Paris, but know that it was weeks after the trip to Strasbourg and that for a great deal of the time I had the lyric “Sitting in a park in Paris, France” from Joni Mitchell’s song California, which could be one of the best songs ever written, stuck in my head the entire time. To add a multimedia aspect to this I’d like to recommend you put the track on while you look at the photos to come.

Doing headstands in a park in Paris, France. 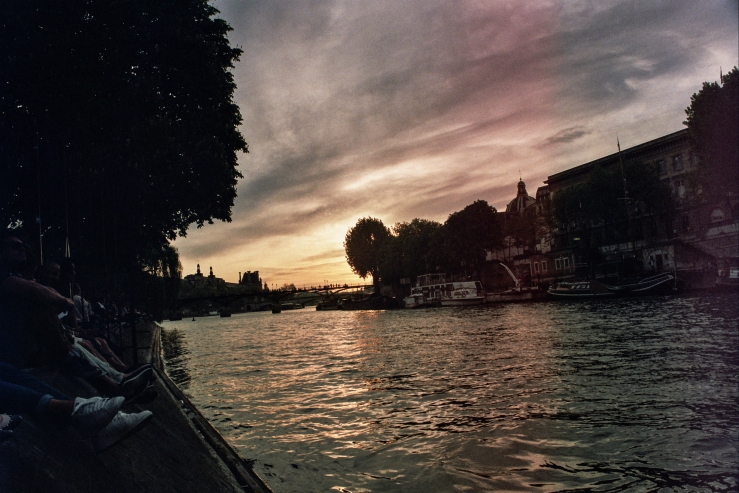 The kids are doing alright in Paris. 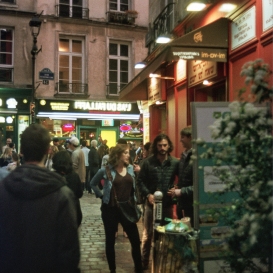 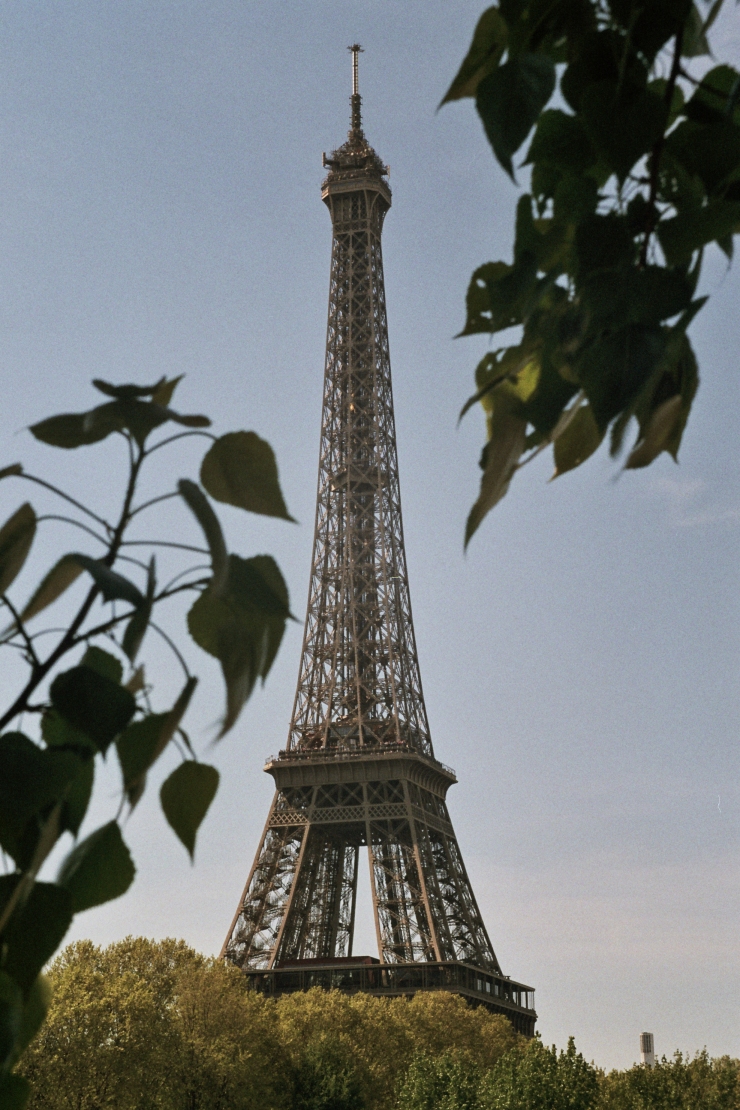 My best attempt at a mediocre Eiffel Tower post card. Act like you wouldn’t pay 50 cents for this. 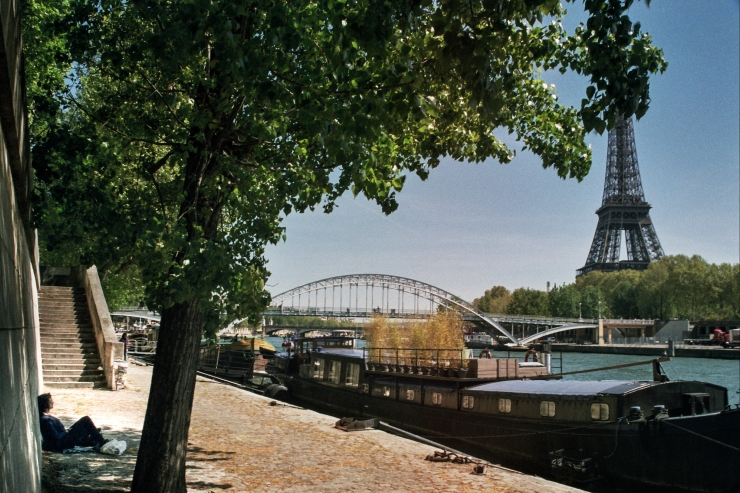 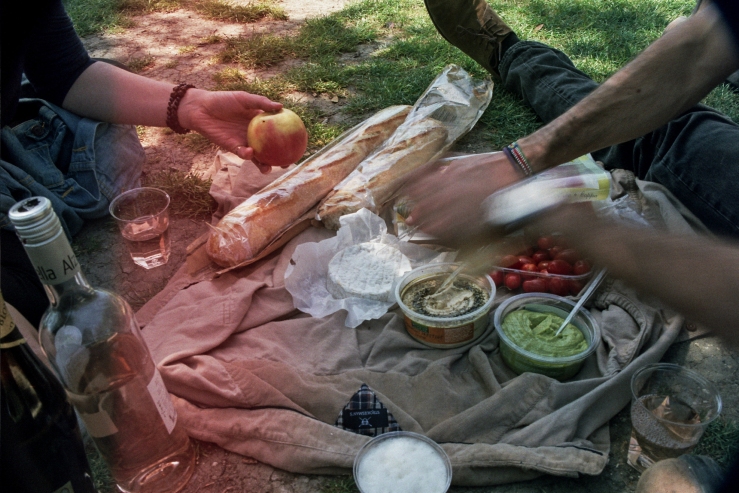 A classic beneath the Eiffel tower picnic featuring the artist previously known as Tyler Caccavale and Rachel Burns.

A bird or dust on the lens? 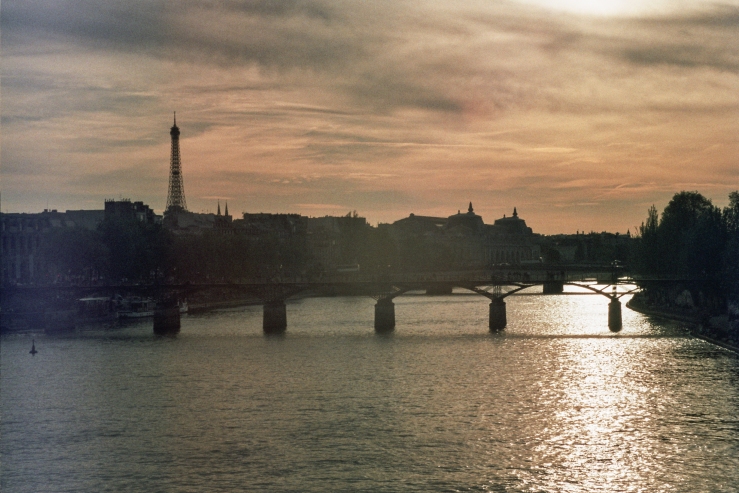 Thanks for looking and listening.