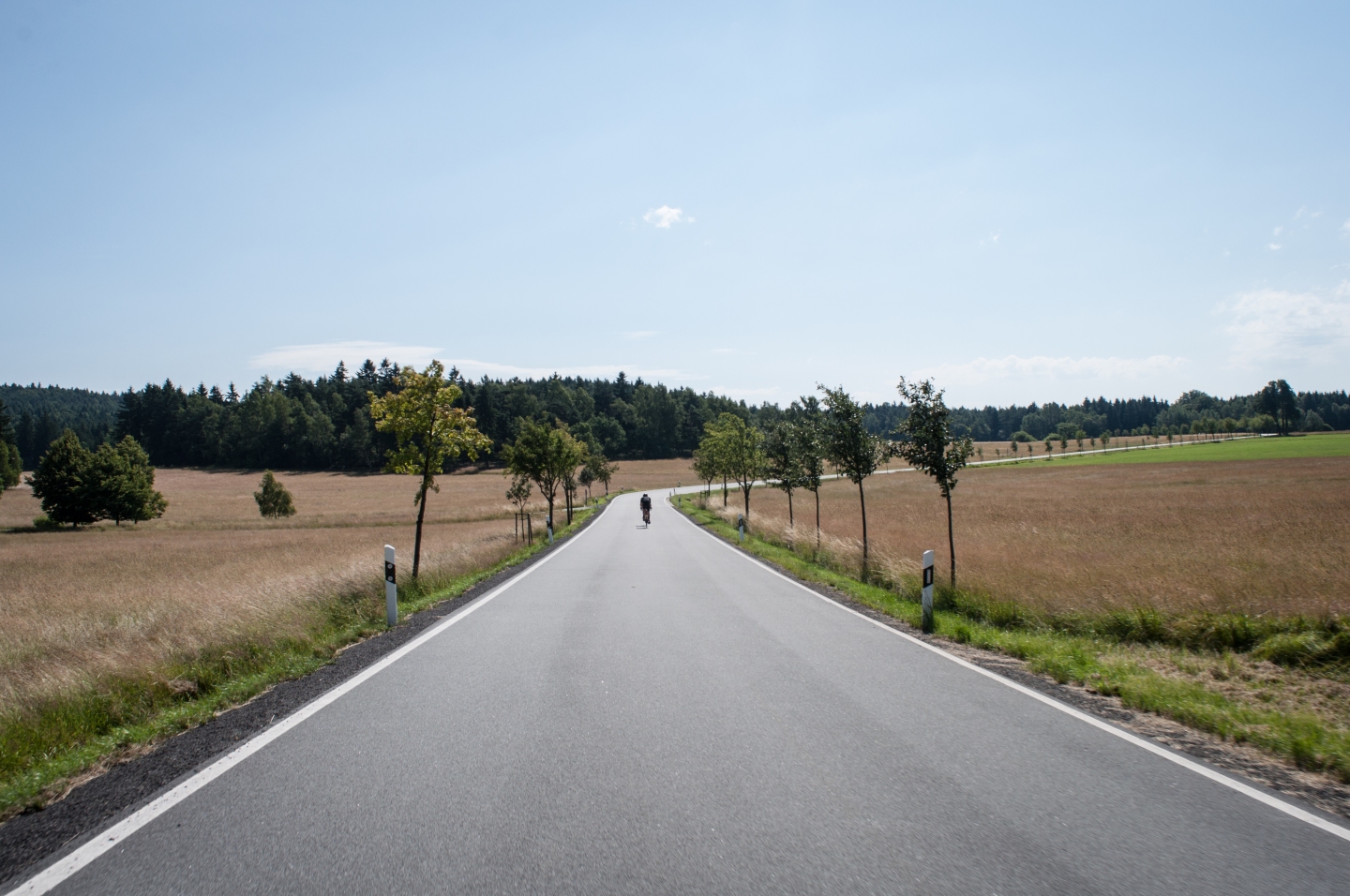 3 countries, 8 hours in the saddle, 122 miles and 11,500 ft. of climbing over pavement, gravel and muddy rooty single track: Rapha Bohemia was a gnarly event.

Rapha describes their Prestige ride series as “unsupported, unsanctioned, and unmarshalled adventures across stunning terrain” and this year’s Rapha Prestige Bohemia fit the bill. Teams of four from all over Europe made their way to the German/Czech/Polish border for a good long day in the saddle. 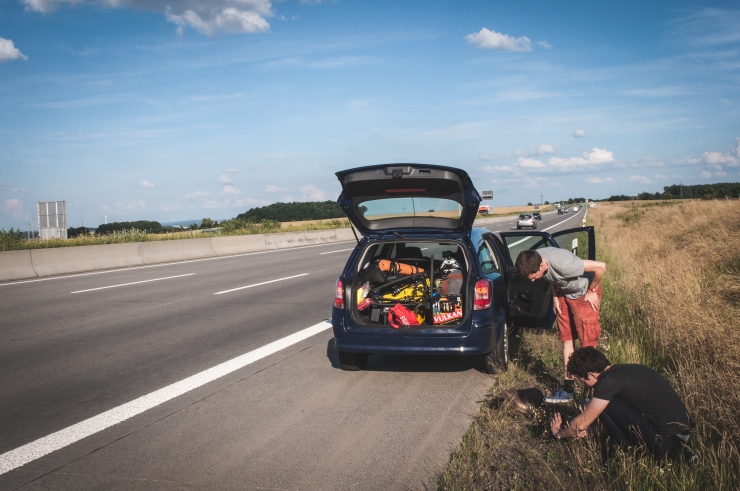 With a three man team (we lost our fourth member when he up and decided to head back to Canada – berate him here), we disembarked from Canyon HQ in Koblenz, Germany and started heading east. Matt (pictured above in coral shorts) took up driving duties in his Opal and Rhys (in black) took the reins as mobile documentarian. We were stoked. The car however, was even more stoked, so much so, that it decided it wasn’t loud enough and opted to relieve itself of its muffler.

We couldn’t really argue with the car – it would be a lot cooler to roll into town sounding like we were riding Kawasakis – so we ditched the muffler and returned to the Autobahn a little bit lighter and a lot louder. Note: We at Out of the Holler don’t condone littering, but we were in a serious hurry, the muffler was too hot to touch and the car was packed to the brim with bikes. 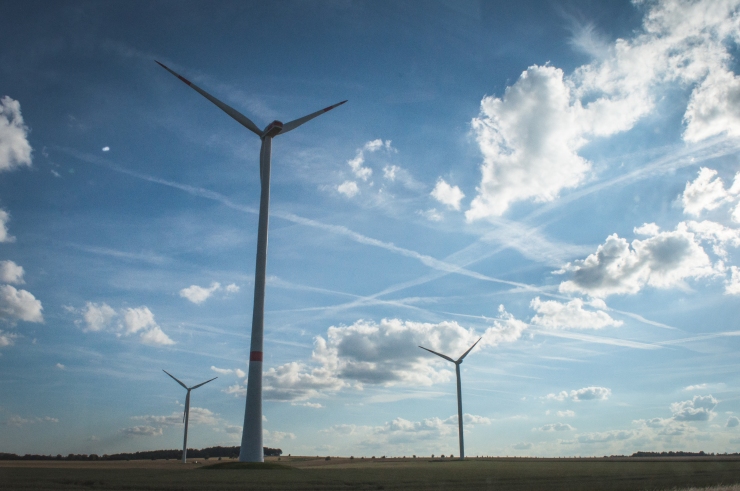 There are wind farms everywhere in rural Germany.

Schmilka, Germany, the start and finish to the ride, rests quietly and quaintly on the banks of the Elbe river 30 miles east of Dreseden, 40 miles southwest of Poland and about 500 feet from the Czech Republic. We made our way into town (or really a bit out of town in a place called Königstein) and began what was to be a daily ritual of sitting and waiting for the regional train to pass. Every single time we came to or left our campsite we would sit at the tracks for about five minutes and wait for the train to come and go. The only reason I’ve included such an underwhelming picture in this post is that so you too can experience what was a surprisingly noteworthy part of our trip. 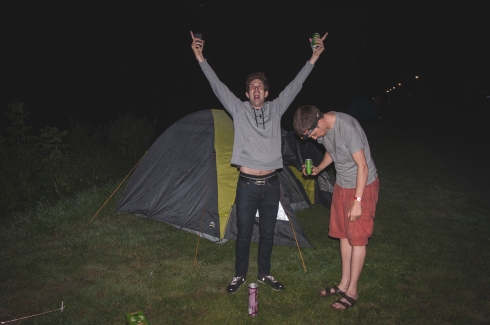 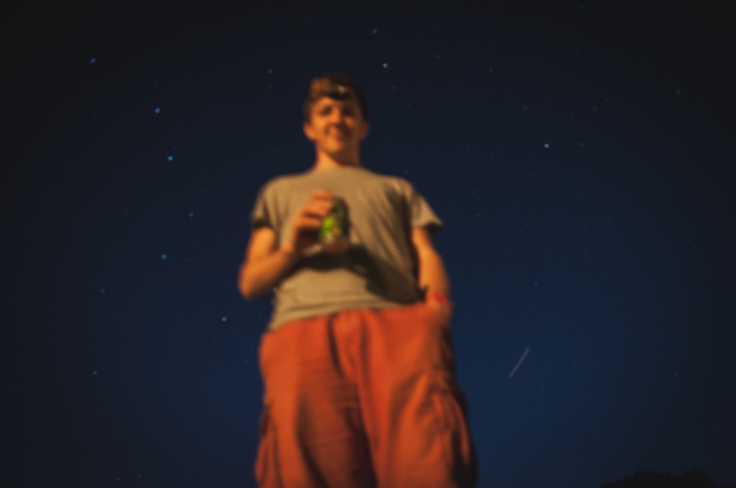 A note on German beer:

When I first lived in Germany in 2012, German beer blew me away. It’s cheap, it comes almost exclusively in half liter bottles and it tastes pretty damn good. It certainly blew the  American light beer (water with a dash of horse piss) that I was drinking at the time out of the water. However, in the last four years as craft brew has become ubiquitous in the US (and I became a little bit less of living breathing college kid stereotype) American beer has gained my favor over its more storied German counterpart. My understanding is that this is largely due to the deutsche Reinheitsgebot or German Purity Law of 1516, which for the last 500 years has dictated how Germans brew beers. That’s super old. The result is beer that is, across the board, solid but seemingly somewhat limited from venturing into the world of nitro stouts and sours. It could also just be German taste. Either way, there is really only one good craft beer coming out of the area around Koblenz and it is made by Vulkan. Their pale ale gives me hope for the future of German breweries, because it would seem that when Germans finally decide to make a beer that’s not a Pils or a Hefe they do a damn good job at it. Sorry, back to bikes.

We got up at 5:30 AM and made our way over to Schmilka to get the lowdown on the route and prepare ourselves for our 7:42 AM start time. With coffees drunk and pretzels consumed, we rode immediately into the Czech Republic and hopped on some gravel roads. 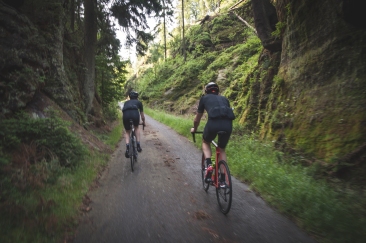 The organizers delivered on their promise that ‘the surface(s) will be mixed’. From beautifully paved narrow forest roads to cobbled streets to chunky gravel double track, the route had a little something for everyone that, y’know, likes this kind of thing.

Somewhere along the way we met up with the new group of Canyon WMN ambassadors and this was my best attempt at taking a group shot from the saddle. They’re a rad bunch of women. 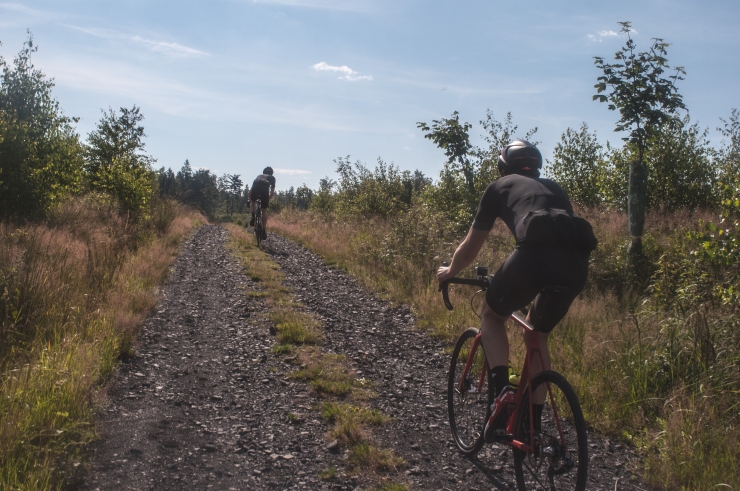 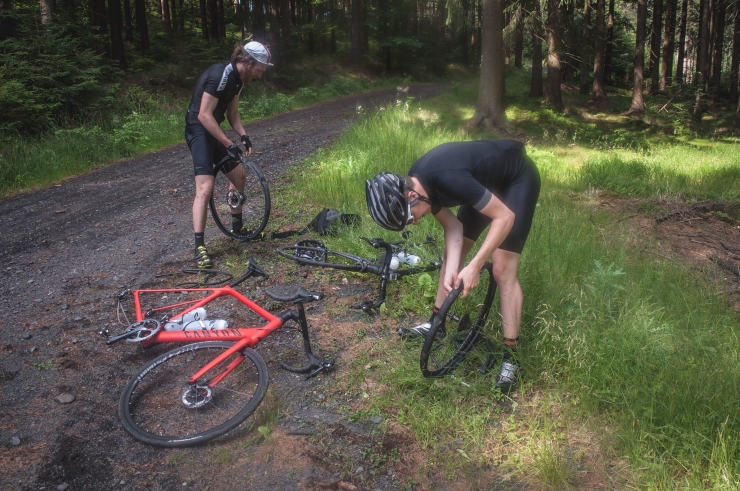 We hit some seriously gnarly gravel and were grateful to have disc brakes and 28 mm tires. A precariously placed drainage ditch resulted in Matt and I and a whole lot of other people getting flats (at least 5 different people were all standing around changing flats). We all had a nice little flat tire break in the woods, while the groups on serious gravel bikes (a Cannondale Slate made an appearance) came rocketing by.

We also got to ride on some seriously dreamy roads. 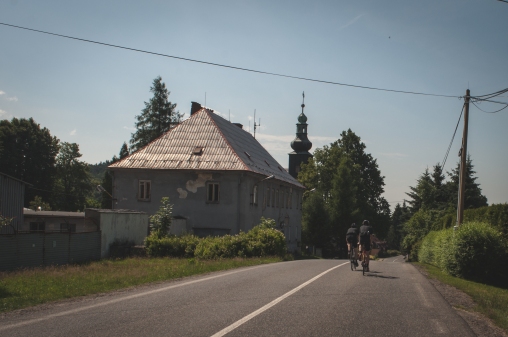 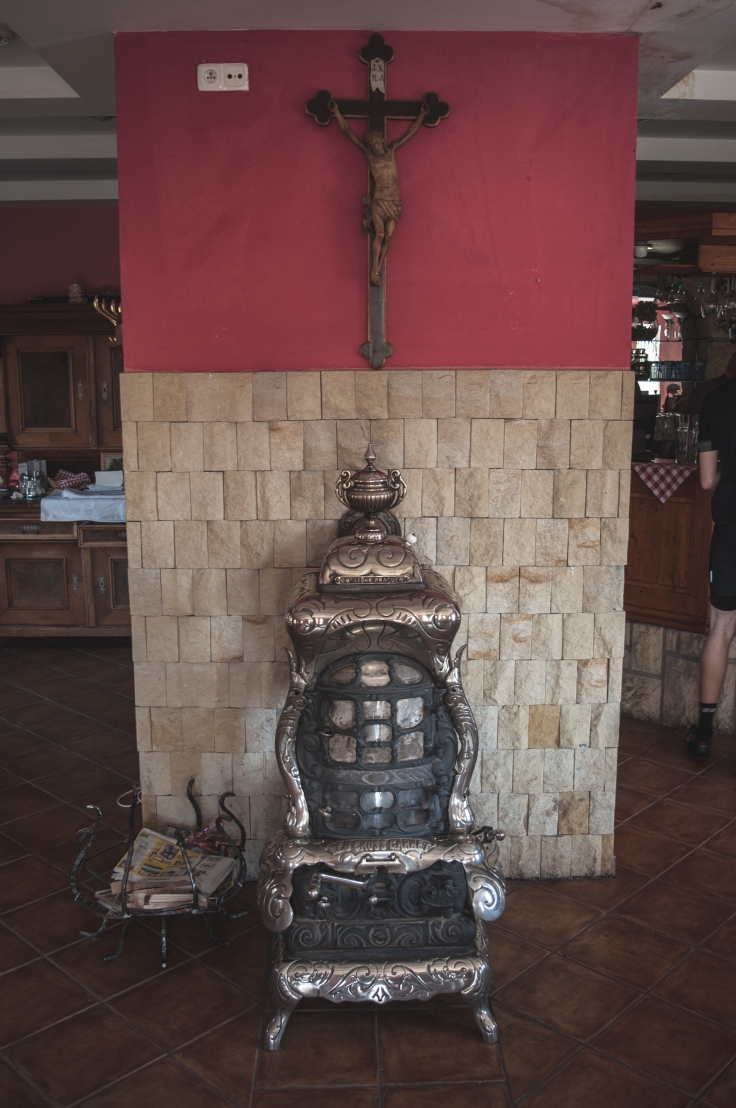 As we ventured deeper into the Czech Republic things began to take on a distinctly more eastern-europeany feel. Take for instance this lovely wood stove crucifix combo inside a Cafe where we stopped for some Cokes. 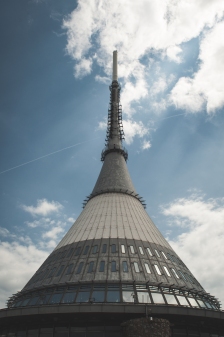 Fast forward an hour and a whole lot of elevation and we had reached the highest point of the ride: The Ještěd Tower. Sitting atop the highest hill around, the tower has a distinctly soviet feel and from the bottom of the climb looks like someone tried to turn a mountain into a robot. 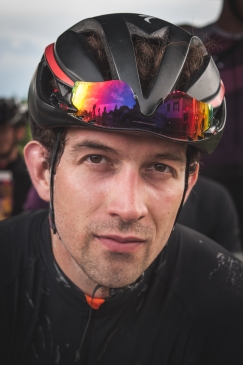 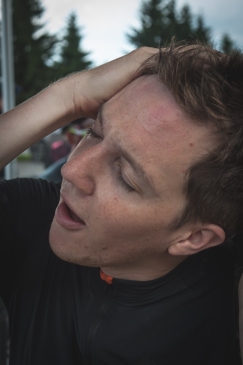 Right after we made it off of the mountain it rained and rained and rained. It rained so hard that we (and everyone else we saw) opted to get off of our bikes and take shelter in a dank and cavernous Czech bar where we watched the Tour de France until lightning knocked the power out.

The rain eased up and we got back on our bikes and on to dirt roads which had now become mud roads and we got and changed some more flats and more people passed us but don’t worry it’s not a race. 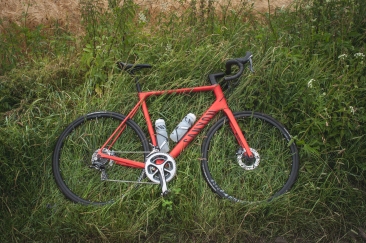 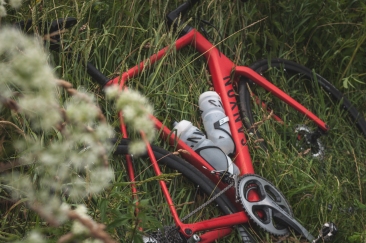 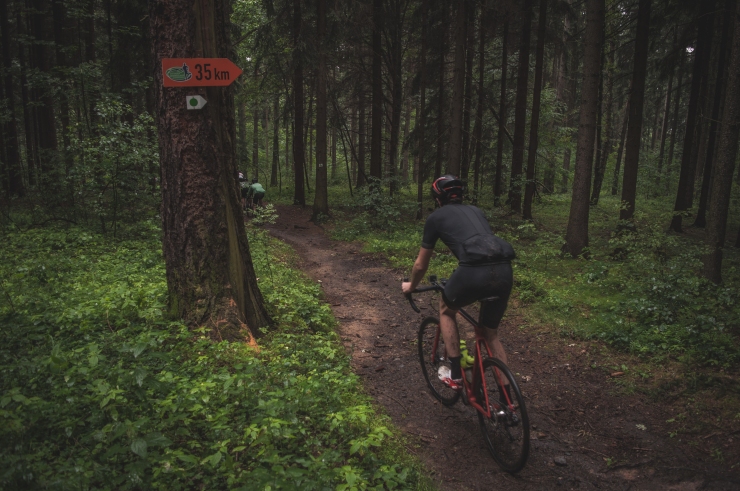 This descent was the pinnacle of the single track shenanigans. It was muddy, rooty, rocky, a little steep and a lot of fun to attempt to ride on a road bike.

With the single track behind us, we returned to some dreamy roads, made some new friends and hammered our way home as we started to run out of daylight. 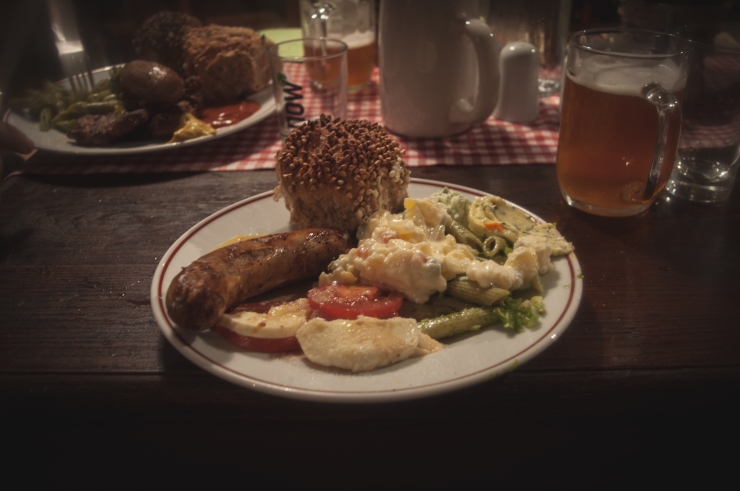 About 10 hours and 120 miles after starting we stuffed our faces with incredible food and beer from Mühle Schmilka. If you ever find your self drifting east of Dresden down the Elbe this is absolutely the place to go. We took some dirtbag showers at the public bathroom, (sort of) watched Germany beat Italy and slept soundly despite the train’s constant coming and going. Thanks to Rapha for hosting such a rad event.